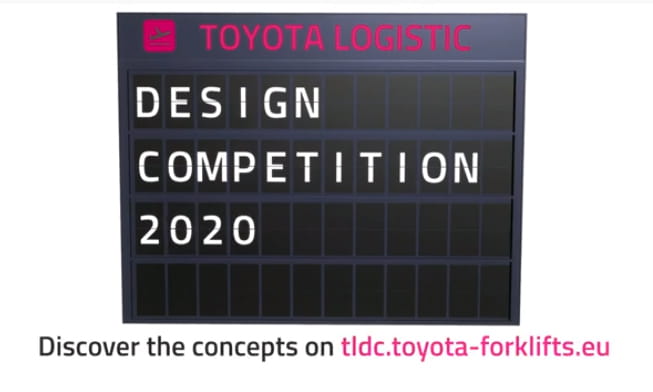 “Toyota is driven by innovation,” said Brett Wood, President and CEO of Toyota Material Handling North America and Senior Executive Officer of Toyota Industries Corporation. “It’s inspiring to see the exceptionally creative and solutions-oriented thinking that is being developed by the next generation of industry leaders.”

Overall, 240 designs were submitted worldwide to the Toyota Logistics Design Competition 2020, with approximately one in every 10 submissions originating from the United States. This was the fourth edition of the competition and the first year to accept entries from North American students. Previously, the Toyota Logistics Design Competition was for European students only. Baggage handling design solutions were evaluated, and 10 semifinalists were selected by a jury of design and innovation professionals from Toyota Material Handling and Toyota Industries companies Vanderlande and Raymond. Finalists of the competition were chosen by industry experts and leaders.

“Over half the semifinalists were from the U.S., and it’s impressive to have a prize winner from the U.S. for the first year as a global competition,” said Greg Smiley, Industrial Design Manager for The Raymond Corporation and head of design for North America for the Toyota Material Handling Group.

Finalists were announced during a virtual awards ceremony in late 2020. Finalists of the competition receive a cash prize and are given the opportunity to apply for a 6-month paid internship at the Toyota Material Handling Design Center.

Learn more about the competition by visiting the Toyota Logistics Design Competition 2020 webpage.

About Toyota Material Handling North America
Toyota Material Handling North America (TMHNA), the industry leader in forklift sales, is composed of two main group companies: Toyota Material Handling, Inc. and The Raymond Corporation. One in three forklifts sold in North America is either a Toyota or Raymond product. With nearly 2.5 million square feet of manufacturing space, TMHNA is composed of five manufacturing plant locations: Columbus, Indiana; Greene, New York; Muscatine, Iowa; East Chicago, Indiana and Oakville, Ontario, Canada that produce more than 1,500 forklifts per week, along with many other types of material handling equipment and solutions. With an annual revenue of over $4 billion, TMHNA has more than 10,000 associates and more than 300 dealer locations to support Toyota and Raymond customers throughout North America.