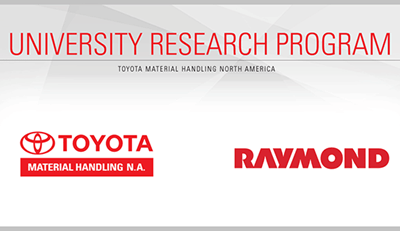 Through the program, TMHNA seeks research proposals from full-time professors or researchers at North American universities. The TMHNA University Research Program’s mission is to encourage and support professors and researchers who are applying their engineering and technical field knowledge to the material handling industry.

“We are excited to launch the second year of our TMHNA University Research Program. We created this program to foster more innovation for the growth of our industry, and we are thrilled with the progress we have seen from the inaugural program,” said Brett Wood, president and chief executive officer for Toyota Material Handling North America. “The TMHNA University Research Program provides a unique opportunity for collaboration between collegiate research and TMHNA, which inevitably will benefit the entire industry.”

Proposals will be evaluated for their impact on the future of the material handling industry, as well as the planning and feasibility of the timeline and budget. After Aug. 31, 2017, TMHNA will evaluate the submissions and may choose multiple proposals as finalists. Professors or researchers with selected proposals will be notified by Oct. 1, 2017, with projects starting in November 2017.
For more information about the TMHNA University Research Program, visit www.UniversityResearchProgram.com.